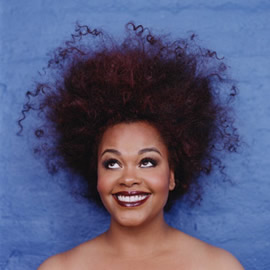 On Thursday evening, T and I went to the Verizon Presents Two Nights of SoulÂ performance at Radio City Music HallÂ which featured Robin Thicke and Chaka Khan opening up for Jill Scott, the Grammy Award-winning singer and songwriter best known for her jazz, rhythm and blues, and neo-soul sounds.

Platinum-selling Grammy-winning R&B singer Chaka Khan (anyone remember â€œI Feel for Youâ€ and “Ain’t Nobody”?) was a disappointment to T and me. I’m fairly certain Ms. Khan, who’s apparently only 54 years old, forgot the words to most of her songs unless she up and decided to scat through everything that evening. Although she wasn’t the headliner, I ignorantly assumed she rehearsed for the concert before getting on stage. During her “bleep blopp bloop” -ing, I wondered how many of us could get away with showing up to work and just pretending to do our job. Not cool, Chaka. Not cool.

As for Robin Thicke, I don’t think I get it. T, along with the majority of the audience that night, is practically in love with the R&B sensation but I found him lackluster to the incomparable vocal stylings of the incredibly talented Scott. Plus, he dances kind of dorky. Maybe if I only heard him on the radio, it would be a different story, but to see him on stage in front of a bare bones backup band dressed in a tux and white sneakers, I thought he looked so awkward that I couldn’t concentrate on his music.