Cool as a carrot. 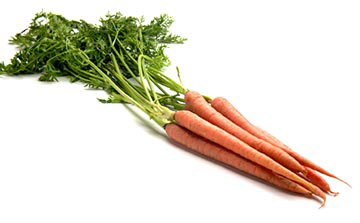 Easy to pack and perfect as cruditÃ©s for that favorite dip, the crunchy texture and sweet taste of carrots is popular among both adults and children. Although they are shipped around the country from California throughout the year, locally grown carrots are in season in the summer and fall when they are the freshest and most flavorful.

The carrot has a thick, fleshy, deeply colored root, which grows underground, and feathery green leaves that emerge above. It is known scientifically as Daucus carota, a name that can be traced back to ancient Roman writings of the 3rd century. Carrots belong to the Umbelliferae family along with parsnips, fennel caraway, cumin, and dill which all have the umbrella-like flower clusters that characterize this family of plants. It seems that carrots did not become a popular vegetable in Europe until the Renaissance. This was probably related to the fact that the early varieties had a tough and fibrous texture. Centuries later, beginning in the 17th century, agriculturists in Europe started cultivating different varieties of carrots, developing an orange-colored carrotâ€”as opposed to the original deep purple hueâ€”that had a more pleasing texture than its predecessor. Europeans favored the growing of this one over the purple variety, which was and still is widely grown in other areas of the world, including southern Asia and North Africa. Carrots were subsequently introduced into the North American colonies. Owing to its heightened popularity, in the early 1800s, the carrot became the first vegetable to be canned*. Today, the United States, France, England, Poland, China and Japan are among the largest producers of carrots.

Carrot roots should be firm, smooth, relatively straight and bright in color. The deeper the orange-color, the more beta-carotene is present in the carrot. Avoid carrots that are excessively cracked or forked as well as those that are limp or rubbery. In addition, if the carrots do not have their tops attached, look at the stem end and ensure that it is not darkly colored as this is also a sign of age. If the green tops are attached, they should be brightly colored, feathery and not wilted. Since the sugars are concentrated in the carrots’ core, generally those with larger diameters will have a larger core and therefore be sweeter.

Carrots are hardy vegetables that will keep longer than many others if stored properly. The trick to preserving the freshness of carrot roots is to minimize the amount of moisture they lose. To do this, make sure to store them in the coolest part of the refrigerator in a plastic bag or wrapped in a paper towel, which will reduce the amount of condensation that is able to form. They should be able to keep fresh for about two weeks. Carrots should also be stored away from apples, pears, potatoes and other fruits and vegetables that produce ethylene gas since it will cause them to become bitter.

Wash carrot roots and gently scrub them with a vegetable brush right before eating. Unless the carrots are old, thick or not grown organically, it is not necessary to peel them; most all conventionally grown carrots are grown using pesticides and other chemicals. If the stem end is green, it should be cut away.

Carrots are delicious eaten raw or cooked. Beta-carotene is not destroyed by cooking; in fact, cooking breaks down the fiber, making this nutrient and carrots’ sugars more available, thus also making them taste sweeter. Take care not to overcook carrots, however, to ensure that they retain their maximum flavor and nutritional content.

*If you love Dina, you will never use canned vegetables.

For some great recipes, click here or here or try this simple side dish:

Fill a medium saucepan with lightly salted water and bring to boil. Add carrots and cook about 5 minutes until they can be easily pierced with a fork. Drain and set aside. In the same, drained saucepan, heat the butter over low heat until melted and slightly foamy. Add onion and cook, stirring often to evenly caramelize, until soft and translucent. Add the carrots and sugar or honey and continue to cook another 3-5 minutes, stirring to combine flavors. Season with salt and pepper and serve!

NOTE: Excessive consumption of carotene-rich foods may lead to a condition called carotoderma in which the palms or other skin develops a yellow or orange cast. The health impact of carotenemia is not well researched. Eating or juicing high amounts of foods rich in carotene, like carrots, may over tax the body’s ability to convert these foods to vitamin A; however, the condition will usually disappear after reducing consumption.