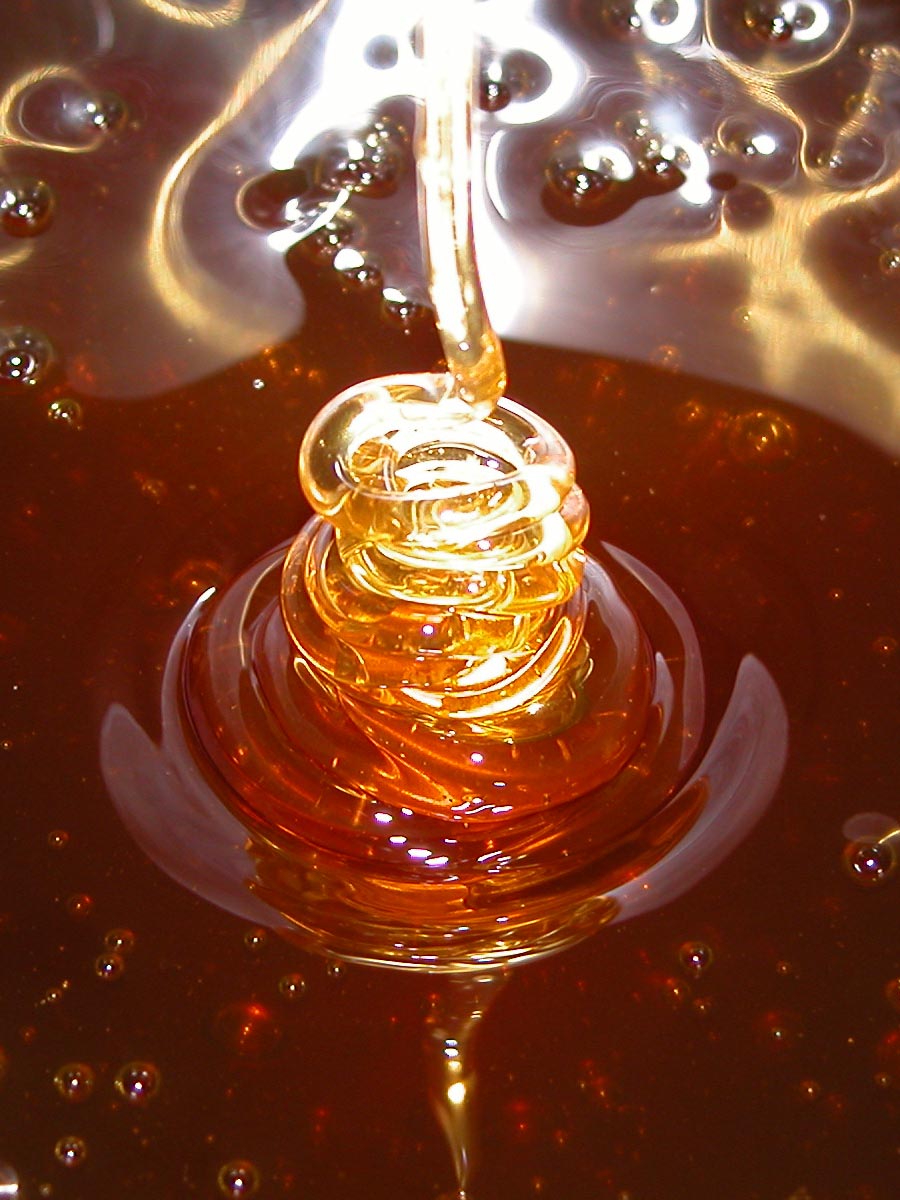 Honey is a thick, sweet liquid made by bees from flower nectar. When a honey bee takes nectar from a flower, it stores it in a “honey sack.” When this honey sack is full, it returns to the hive, deposits the drop of nectar into the honeycomb, and evaporates the water out of the nectar by fanning its wings. Once the honey has aged, wax is used to seal it in the comb, which keeps it clean and safe.

Some facts about honeybees:
*A honeybee makes 154 trips for one teaspoon of honey.
*A colony produces 60 to 100 pounds of honey a year.
*To gather a pound of honey, a bee flies a distance equal to more than three times around the world. It takes two million flowers to make one pound of honey.

Contrary to what many people think, a honey’s color and flavor does not derive from the bee, but from the nectar’s source. In general, the darker the color, the stronger the flavor. There are hundreds of different honeys throughout the world, most of them named for the flower from which they originate. The flowers that produce some of America’s most popular honeys are clover, orange blossom and sage. Other honeys, some of which are only available in limited quantities in the region from which they originate, come from the following blossoms: alfalfa, buckwheat, dandelion, heather, linden, raspberry, spearmint and thyme, just to name a few.

When using honey in cooking, it’s important to know its source â€” buckwheat honey, for example, has far too strong a flavor to be used in a recipe that calls for orange blossom honey, which has a light, delicate fragrance and flavor. Honey comes in three basic forms: comb honey, with the liquid still in the chewy comb, both of which are edible; chunk-style honey, which is honey with pieces of the honeycomb included in the jar; and regular liquid honey that has been extracted from the comb, much of which has been pasteurized to help prevent crystallization. Other honey products such as honey butters, honey spreads and whipped honey are available at most supermarkets.

Store tightly sealed liquid honey in a cool, dry place for up to a year; store comb and chunk honey for 6 months. When refrigerated, honey crystallizes, forming a gooey, grainy mass. It can easily be reliquefied by placing the opened jar either in a microwave oven at 100 percent power for about 30 seconds (depending on the amount), or in a pan of hot water over low heat for 10 to 15 minutes.

Honey is widely used as a bread spread and as a sweetener and flavoring agent for baked goods, liquids (such as tea), desserts and in some cases savory dishes like honey-glazed ham or carrots.

Check out The National Honey Board for more nifty information about honey.

NOTE: Honey, corn syrup, and other natural sweeteners are a potential threat to infants. Since an infant’s digestive excretions are non-acidic, ingestion of honey creates an ideal medium for botulinum endospores to grow and produce sufficient levels of toxins to cause infant botulism. For this reason, it is advised that neither honey, nor any other sweetener, be given to children under the age of 18 months. Once a child is eating solid food, the stomach produces enough gastric acid to prevent the germination of the endospores.

For some great recipes, click here or here or try this simple dish:

Salt & pepper both sides of chicken tenders. SautÃ© chicken lightly in olive oil over medium high heat (about 4 minutes per side). Stir in mustard and honey to coat chicken and continue to cook another 2-3 minutes until chicken is no longer pink inside. Serve with buttered noodles and a side salad.

UPDATE: This just in from RealAge.com’s Tip of the Day.