Crying in my Suba.

THIS EVENING: A dinner in three parts.

INT: Suba, on the Lower East Side, recently renovated from a late-night club into a painfully chic, contemporary, Spanish restaurant.

A couple is seated at one of many tables located on a platform that, they kid you not, appears to be hovering over a pool of water.

Dude: What’s that smell?
Chick: I think it’s chlorine. Kind of inappropriate for inside a restaurant, no?
Dude: We’ll find out.
Chick: I think I’m sitting over the filter mechanism, although I’m not sure I’m complaining just yet.

A server arrives and explains the menu to the couple. There are no daily specials. It is painfully chic.

Dude: So, this is some kind of tapas menu?
Chick: Yep. I suggest we get a bunch of stuff, really mix it up. I barely recognize any of these ingredients and I, mind you, am a total food snob, so I would love to sample what they have to offer so I can blog about it and sound like I know what I’m talking about.
Dude: Ok, then, you choose because I trust you.

The couple places their order and sits quietly for approximately 8 – 10 minutes, awaiting their dishes and casting their eyes about the room in order to discern if they are, in fact, in a cavern of some sort that houses a giant, chlorinated pool, or a painfully chic restaurant on the Lower East Side. It is, they deem, too soon to tell.

The server returns with their first course: a “Tortilla a la SidrerÃ­a,” described as a cider-house omelet with bacalao (salt cod), carmelized onions, and American Sturgeon caviar and another froufrou dish called “Gambas a la Plancha” which is made with Maya prawns, seasoned pickles, chorizo sausage, garbanzo purÃ©e, and harissa (chile paste).

Dude: Hm, that’s a weird texture.
Chick: Which? This icky, smashed-up-egg-in-a-martini-glass-thing? I’m not sure I get it. Is this slimy substance a half-cooked egg white? I’m feeling a little gaggy. You?
Dude: Definitely. Let’s eat the prawns instead. Their eyeballs are kind of freaking me out staring up off the plate like that.

Chick: Yum, these prawns are good. And this garbanzo purÃ©e is quite tasty. I’m not sure I see the chorizo, though. Isn’t there supposed to be chorizo in this dish? And why in the heck would they do that to a poor pickle? It looks like a coiled-up worm. Not very appeti…
Dude: HOLY COW! Did you just see that?!?
Chick: What? What just happened?
Dude: I cut into the head part of my prawn and it exploded!
Chick: WHAT?!?
Dude: Seriously, look. There’s…head stuff…all over the dish…and on my glass…and on the table next to us. (points at enough blood spatter worthy of a crime scene)
Chick: Oh, dear. I think I’m going to throw up.

Server: Here’s your next course: Croquetas. Two each of duck, crab, and ham/asparagus over complimentary sauces. Are you finished with your first course dishes? May I remove them?
Dude: Yes, please, thanks.
Chick: *gurgle*

Server: Your final course: Arroz Negro. This is paella made with squid ink and combined with baby squid, fava beans, sea urchin, and lemon. May I remove this other dish for you?
Dude: Yes, please, thanks.
Chick: *gag* 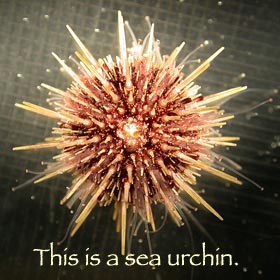 Dude: I can’t see anything. What’s in the dish? It’s all black. Everything’s black.

Chick: I think I see a lumpy thing here. It might be a fava bean covered in squid ink. (tastes squid ink-covered fava bean) Yes, it’s definitely a fava bean. And I think these round, blackish rings are the baby squid.
Dude: (tries round, blackish ring) Yes, yes, it’s squid. Ok, so it just looks weird, but, so far everything tastes pretty…Gaa! What did I just eat?
Chick: What did it look like?
Dude: I don’t know. It was covered in squid ink. I couldn’t tell, but it felt like a wet sponge.
Chick: Maybe that was the sea urchin. Have you ever eaten sea urchin before?
Dude: No, but that was probably it. Here, taste it.
Chick: (tastes it) Yuck, that’s strong and fishy…and what’s with the bizarre textures in all of these dishes? Suba thinks it’s painfully chic and exotic, perhaps, but it’s so unappealing. (holding back vomit) This is some sort of highfalutin, crazy ingredient, pretend tapas place and I don’t feel well and I’m getting sweaty and I need to find my happy place.

Server: May I show you the dessert menu?
Dude: No, I think we’re done.
Chick: (starts to cry; she does not like to leave a restaurant hungry)

EPILOGUE: Chick knows that she’s a big wuss for not mentioning her less-than-pleasant experience to her server or restaurant manager and using her blog to bash the meal. She would appreciate it if you could not lose respect for her.