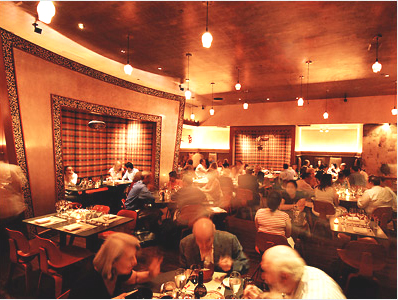 A while back, Marc and I enjoyed a late-night dinner at Vong*, Jean-Georges Vongerichten’s Upper East Side restaurant where the cuisine is an “amalgam of carefully crafted French technique blended with the bold and earthy flavors of the Far East.” I was thrilled to be in one of Jean-Georges’ restaurants, having admired him from afar for so long (and being unable to afford dining at any of his establishments on my own).

Born and raised on the outskirts of Strasbourg in Alsace, France, Jean-Georgesâ€™ earliest family memories are about food. The Vongerichten home centered around the kitchen, where each day his mother and grandmother would prepare lunch for the almost 50 employees in their family-owned business. He opened his most famous restaurant, Jean-Georges, in Trump Tower at Columbus Circle in New York City in 1998 and has in recent years opened a series of other restaurants around Manhattan, Shanghai and elsewhere. Jean-Georges remains one of the few restaurants in the city awarded four stars by the New York Times and three stars by the Michelin Guide.

Our appetizers were the simple, yet succulent Crab Spring Rolls with a tamarind dipping sauce and Warm Asparagus Salad with avocado and enoki mushrooms.

For our entrÃ©e, we had the Seared Black Sea Bass in a sweet-and-sour mushroom broth and the Roasted Chicken with Lemongrass, served with sweet rice in a banana leaf.

For once, we decided to skip dessert and instead pick up something sweet (brownies) at Dean & DeLuca to have at home. For those of you unfamiliar with this upscale grocery store/fine foods eaterie, here’s a brief history:

In 1977, Manhattan’s SoHo (“South of Houston Street”) was still a bleak warren of warehouses and small manufacturing companies. A bright light had emerged a few years back, when a history teacher decided to abandon his career to pursue a dream instilled during childhood. The little cheese shop on Prince Street that Giorgio DeLuca opened in 1973 quickly became an institution, offering artisan cheeses, lovingly made and the finest in their class. But his SoHo neighbors had a growing appetite for more products of such outstanding quality.

Joel Dean, a publishing executive with Simon & Schuster, had been talking with Giorgio DeLuca for years about opening a special kind of food store. They dreamed of a place that would offer customers a sumptuous celebration of food, a place to experience all of the pleasures that cooking and eating can bring to the senses.

That dream, the original Dean & DeLuca, opened for business in September 1977. Artist and founding partner Jack Ceglic designed the original store to evoke a turn of the century food department, with high ceiling fans spinning over a vast array of products that lined the high, white walls. Joel Dean and Giorgio DeLuca traveled the world in search of handcrafted products and artisan foods, and imported these discoveries into their enchanting emporium. On display was a staggering variety of produce and foodstuffs, including many never previously sold in this country.

“We were the first to sell balsamic vinegar, sun-dried tomatoes and dried mushrooms,” recalls Giorgio DeLuca. “In those early days, I went out of my way to establish extra-virgin olive oil. Everyone who came into the store got a taste.”

In the ’80s, Ceglic, who had become the true SoHo pioneer, set out with a plan built upon the concept of an outdoor marketplace. In his own words, “a street of shops, each with its own look and feel, each with its own manager, free to develop individual displays.” His design is at once revolutionary and timeless: massive exposed columns, Carrarra marble floors, white tile walls, stainless steel shelving and display cases, ample room for the meat and fish, bakery and pastry, cheese, candy and coffee display counters that would enable customers to assemble all the ingredients for an extraordinary meal.

The new Dean & DeLuca opened in 1988 with four times the space. Soon, smaller retail outlets were to follow, in Manhattan’s Rockefeller Plaza and in the Paramount Hotel. Espresso Bars were opened in locations around New York and in Washington, D.C., and in 1993, a second store with 10,000 square feet opened on Market Street in Washington, D.C.’s Georgetown District. Dean & DeLuca has opened retail locations that have become epicenters of culinary excellence in their locations.

For our fifth anniversary dinner last month, Marc reserved a table for us at Anthony Bourdain‘s French restaurant Les Halles on Park Avenue where he sipped a fantastically authentic and ooey-gooey French Onion Soup followed by a hearty Steak and Pommes Frites entrÃ©e while I had the Terrine du Jour and a heaping bowl of Mussels in Broth as my main course. We finished off our meal with a tasty and decadent warm chocolate & banana tart.

Aside from the wonderful food New York City has to offer, I really appreciate the history behind these great restaurants and neighborhoods and do my best to learn about them whenever we frequent an establishment here. I’m happy to share our experiences with (the five of) you and hope that, even if you don’t have the abundance and variety of eateries in your neck of the woods as we do in Manhattan that you are at least inspired to try a new dish when you do eat out or prepare a meal at home.

*Vong has since closed.