Aside from both of us suffering from fantastic sinus headaches this weekend, Marc & I managed to check out the Hall of Human Origins at the American Museum of Natural History. Some info:

After several million years of human evolution, only one hominid species remains: Homo sapiens. We have spread across every continent into a wide range of environmentsâ€”and in the process, minor differences between people living in separate regions developed over the course of thousands of years. As a result, humans today have a variety of skin colors, body types and facial features. But studies of human DNA reveal that all humans are remarkably similarâ€”we are 99.9% genetically identical.

I learned a ton of interesting stuff (see above) and now desperately want a monkey. I mean, look how cute this little guy is: 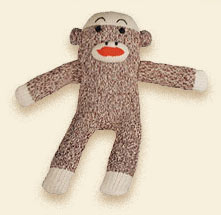 We also visited the Spiders: Alive! exhibit (FYI: spiders = not cute) in honor of Spider-Man Week in NYC. I didn’t get it because none of the spiders on exhibit were radioactive and Spider-Man didn’t even show up, but it was creepy good fun regardless.

Afterward, we took a wonderful walk through Central Park and watched a bunch of people exert themselves unnecessarily on the Lake:

The most popular use of the lake today is for row boating and the sturdy vessels can be rented at the Loeb Boathouse at the northeast corner of the Lake. Probably the best way to experience the variety of terrains that surround the manmade body of water is a boat trip, and there are few greater pleasures to be had in Central Park then a leisurely cruise around the shoreline. Around the lake you can see places as diverse as the Bethesda Terrace, the Loeb Boathouse, the Bow Bridge or Hernshead, not to mention the fauna which includes ducks, mallards and a rather extended family of turtles. For the many years preceding the construction of Wollman Rink in 1951 the Lake was also the center of ice-skating in the park. This was a wildly popular diversion, especially at the turn of the century when as many as 40,000 people were reported to have skated in one day. It offered New Yorkers valuable exercise, as well as a socially acceptable place to socialize (although for many years one end of the lake was designated strictly for use by women). 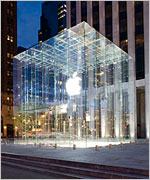 We then ventured to the Apple store on 5th Avenue because Marc had a gift card burning a hole in his wallet and, sadly, his original iPod just wasn’t cutting it any longer. Boys and their toys. Sigh. I, on the other hand, will be holding out for this.

This particular location (pictured on left) is a glass-enclosed structure above ground with the actual retail shop located under the sidewalk. I think it’s one of those things that seem really cool and New York-like, but probably was just a way to save on rent.

Last night, we checked out the genius that is I Eat Pandas at Mo Pitkins:

Glennis McMurray and Eliza Skinner join forces as I Eat Pandas, a musical improv group that takes suggestions from audience members and creates a unique 25-, 15- and 5-minute musical, all based on the same suggestion.

We laughed a heck of a lot and came home singing their catchy, silly, original songs. I’m quite sad that I can’t remember any of them today, though.

This evening, E and I decided to try Jeollado on 4th Street for our monthly dinner where she had the Tofu Dolsot Bibimbob (probably because it was so much fun to say) and I ordered the Vegetable Udon. I’ve walked past this place a million times and was happy to finally test out the food and service, both of which were quite pleasing and not at all like that other time, thankfully.