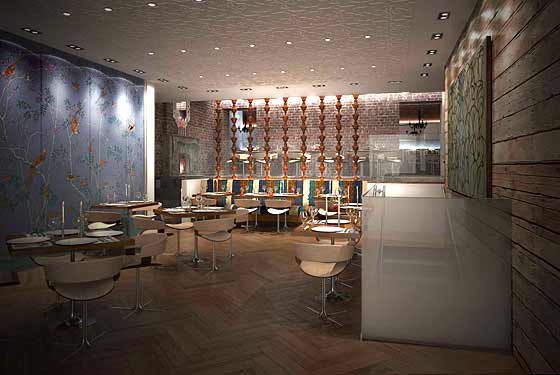 Marc made reservations for our 64th monthiversary last month at Amalia, an 8,000 square foot, bi-level restaurant and lounge which serves “an inventive American cuisine with a Mediterranean flair.” The dÃ©cor in Amalia is modeled after the ornate Baroque style, but still maintains a simplicity so that the ambience enhances the food instead of competes with it. We found the tin ceiling, pin lights, soft music, and gorgeous parquet floor provided a very warm mood for us during dinner. There were no tablecloths and an exposed brick wall which played nicely in its starkness against the otherwise lavish atmosphere.

For our appetizer, we ordered the Bread Spread Trio (spreads consisted of an avocado hummus, a Meyer lemon-green olive tapenade, and a pomegranate-walnut butter) and a Greek-inspired Shrimp Saganaki, which was a little underwhelming. For our main course, I had the Jumbo Shrimp FideuÃ¡, a paella dish made with Spanish pasta instead of rice and served with San Marzano tomatoes and a smoked paprika aÃ¯oli. Marc ordered the Angus Skirt Steak rubbed with Mediterranean spices and served with pepperonata (carmelized peppers) and baby arugula.

For dessert, we split the Warm Hazelnut and Polenta Torte which was decadently drizzled with praline hot fudge and accompanied by a scoop of ricotta gelato on the side.

A couple of weeks later, Marc & I and about a dozen others celebrated K’s birthday at Samba-Le:

Brazilian and Italian traditions blend seamlessly at this East Village oasis. Full of warmth and passion, Samba-Le encourages sharing amongst friends with a bold menu of small plates. The seasonal menu changes monthly and their varieties of sangria and Brazilian specialties like caiparinhas will have you dancing well into the night. There’s live samba music every Friday and Saturday night after 11pm. Samba-Le is a great venue for large groups, but call in advance for reservations and bring cash as the venue does not accept credit cards.

A month later, to celebrate our 65th monthiversary, Marc & I headed to Via Delle Zoccolette, which is an adorable, albeit Euro-trendy, Italian place…and downstairs from our apartment. We couldn’t have eaten anywhere closer if it was our own kitchen. To stick with the tradional Italian fare on the menu, I opted for spaghetti & meatballs and Marc had lasagna. We were in and out of that place in about 45 minutes, which was perfect being that it was near ninety degrees that evening and Zoccolette wasn’t air conditioned.

To top off nearly two months of celebratory eating, A and I headed to Little Italy this evening for her belated birthday dinner at her favorite Mulberry Street restaurant, Caffe Sorrento where she enjoyed the Calamari Luciana and I the Fettuccine con il filetto di pomodoro while we both polished off an entire basket of soft, semolina bread. A is one of my nearest and dearest (and most beautiful) friends and it was wonderful to spend a calm, breezy summer evening catching up with her.

As I look back on this post, I realize how grateful I am to have such an assortment of delectable eateries so close to home, but, more importantly, how honored I am to share my meals with some of the most fabulous people I know.