Bite of the apple. 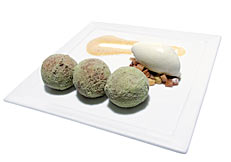 It’s Restaurant Week this week (last week, too, actually), so I enjoyed a fantastic dinnerâ€”probably one of the best I’ve eaten in monthsâ€”this evening with L at Marcus Samuelsson’s Asian-fusion restaurant Riingo. While L chose items off the main menu, I went with the prix fixe Restaurant Week menu (for $35) which included an appetizer of Salmon Avocado Sushi Roll, a main course of perfectly seared Hangar Steak served over buttery, creamy, smooth mashed Japanese sweet potatoes and grilled tomatoes, and crispy-and-sugary-on-the-outside, soft-and-gooey-on-the-inside Green Tea Donuts with green tea ice cream on the side (pictured here on right).

At the age of 36, chef Marcus Samuelsson’s achievements read like those of a seasoned veteran. But he is a young, accomplished chef still on the rise, elevating the bar for culinary excellence. After attaining critical and popular success for his interpretive Scandinavian cuisine at Aquavit, Samuelsson conceived Riingo to further challenge his creative sensibilities. In this modern restaurant, inventive versions of American and Japanese classics coexist on a single menu.

With a name inspired by the Japanese word for “apple” (the iconic symbol of New York City), Riingo’s menu reflects chef and proprietor Marcus Samuelsson’s creativity, his admiration for American and Japanese cuisine, and the diversity of flavor that New York represents.

I love to eat, but I hate going to the gym, so in order to compensate for the massive amounts of yummies I jammed in my craw tonight, I walked all the way homeâ€”about three milesâ€”in 4-inch strappy heels. Needless to say, I’m pretty proud of myself right now, although, admittedly, about six blocks from my apartment, it started to feel as though there was a tiny barbed wire pressed against my left ankle. Ah, the lengths I’ll go to for great food.