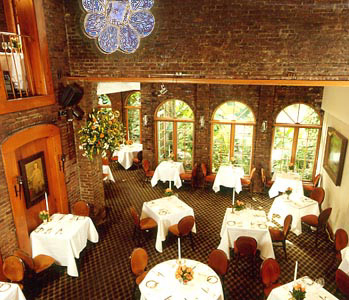 A couple of Saturdays ago, Marc took me out for my birthday dinner at One If by Land, Two If by Sea in the West Village. We opted for the tasting menu (at $95/person), which was incredible and included decent-sized portions of items offered off the main menu. Our dinner lasted for about three hours. Here’s what we ate:

*And for dessert, a chocolate trio consisting of a “gourmet” ice cream sandwich, chocolate fondant, and chocolate crÃ¨me brÃ»lÃ©e.

The cool thing about One If by Land was that, in the mid-1700s, it was a carriage house (in New York City!) which served as part of the Richmond Hill estate, the then headquarters for General Washington during his defense of Manhattan. The interior is dark and woodsy and full of bricks, but it’s still quite romantic and airy. Here’s a history of the place:

By the end of the century, Aaron Burr purchased the property housing his coach and sleigh in the carriage house at 17 Barrow Street. The original hitching post was unearthed during the buildings transformation from abandoned bar to fine-dining restaurant in 1969 and is still visible in the bar today. Under the watchful eye of the Landmarkâ€™s Commission, the original owners of One if by Land, Two if by Sea, Armand Braiger and Mario DeMartini, spent three years carefully removing the modern materials to expose the buildingâ€™s nearly perfect 18th century bricks and along with it the original charm of the carriage house. During the renovation process, workers uncovered four arched passageways in the buildingâ€™s basement that had been bricked-up long ago. Further excavation revealed that the passageways tunnel down Barrow Street to Hudson Street where the riverâ€™s edge once met the city. Folklore suggests that these tunnels were used to smuggle contraband during The Revolutionary War and were once part of The Underground Railroad during Americaâ€™s Civil War. Finally, the renovation unearthed the cityâ€™s famous underground stream, Minetta Creek. Standing on opposite sides of the stream in a history rich environment, the two partners agreed on the name of their new restaurant and the beautifully restored One If By Land, Two If By Sea opened its doors in 1972.

Today, One if by Land, Two if by Sea continues to be highly rated by Zagat and other restaurant guides. Executive Chef Gary Volkov uses the freshest flavors and an exotic arrangement of ingredients in each of his dishes.